Your Success is our responsibility 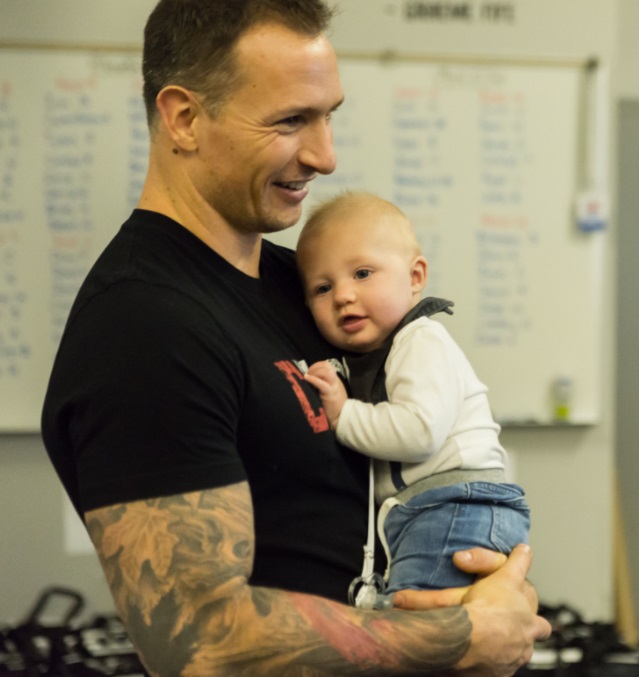 There is nothing more satisfying than seeing how the work we do transforms people. When members show up & give it their all, it enhances their body, their mind, their health, their relationships, their work & everything in between. It’s fun just being a part of that.

In 2006 Christi and I bought a personal training studio in south Florida. We left Calgary bright eyed and bushy tailed. We were fortunate enough to work with some of the NHLs finest including the Florida Panthers, a few Olympic athletes, an LPGA tour pro and the world’s best wakeboarder.

Although the high-profile athletes were great, we were really fortunate to have developed strong relationships with regular Joes, desk jockeys and stay-at-home moms. After more than 10000 hours of one-on-one & small group training, in addition to nutrition/weight loss coaching, we decided to pack it all in and move back to Calgary to start Barracks Fitness. We couldn’t be happier. 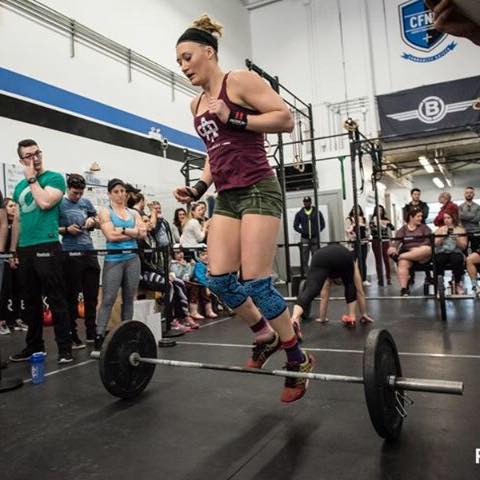 In order to be a good coach you must be able to meet each individual where they are and help them find what they are truly looking for. This could be achieved with tips on exercise, but being a true coach involves listening and trying to understand the whole individual. Once we have goals set and new things to strive for our members are happy, stronger, fitter and more motivated in their minds and bodies. This is exciting for both coach and athlete. 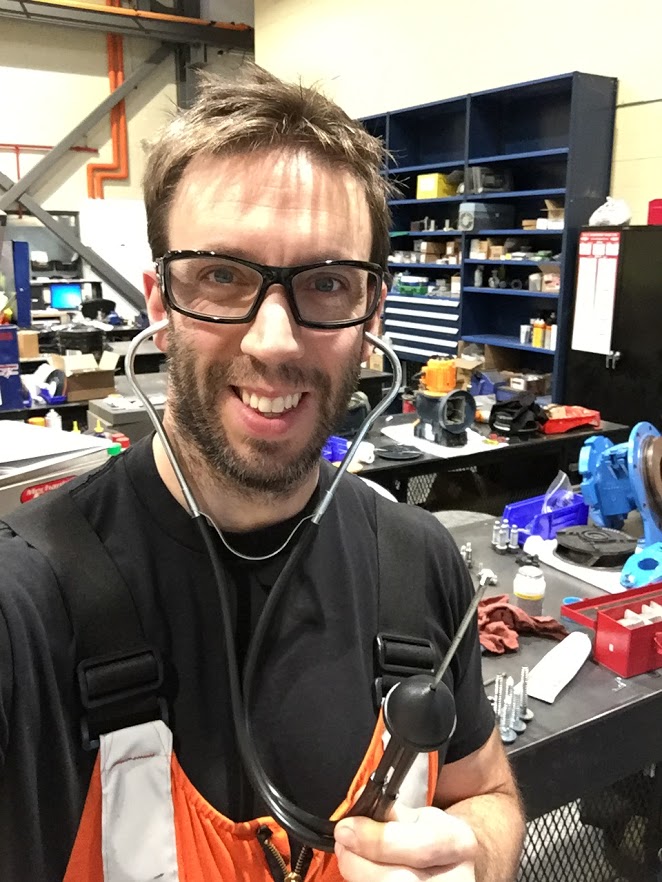 There is a certain je ne sais quoi about being a fitness coach. I really enjoy helping athletes develop different skills, especially the snatch and clean & jerk, I love the precision that’s required with Olympic weightlifting. I find it incredibly rewarding to meet a new member that has trouble moving through a full range of motion when they begin and, over the course of a few months, I get to watch them regain the mobility they were born with. Being able to motivate someone to push themselves past the point they thought was possible and seeing the excitement on their face when they surprise themselves is actually priceless.

I started CrossFit in 2014 and moved to Barracks Fitness in 2015. Since then I’ve competed in numerous competitions including The Battle in the Barracks, Bridge City Beatdown, Halloween Havoc, the CrossFit Open and The CanWest Games. In 2016, I completed my CF-Level 1 Trainer course and began coaching at Barracks Fitness. I’ve taken courses in different sports such as gymnastics, power lifting and strong man to gain more knowledge, better coach athletes and to help with my own progress in the sport of CrossFit. 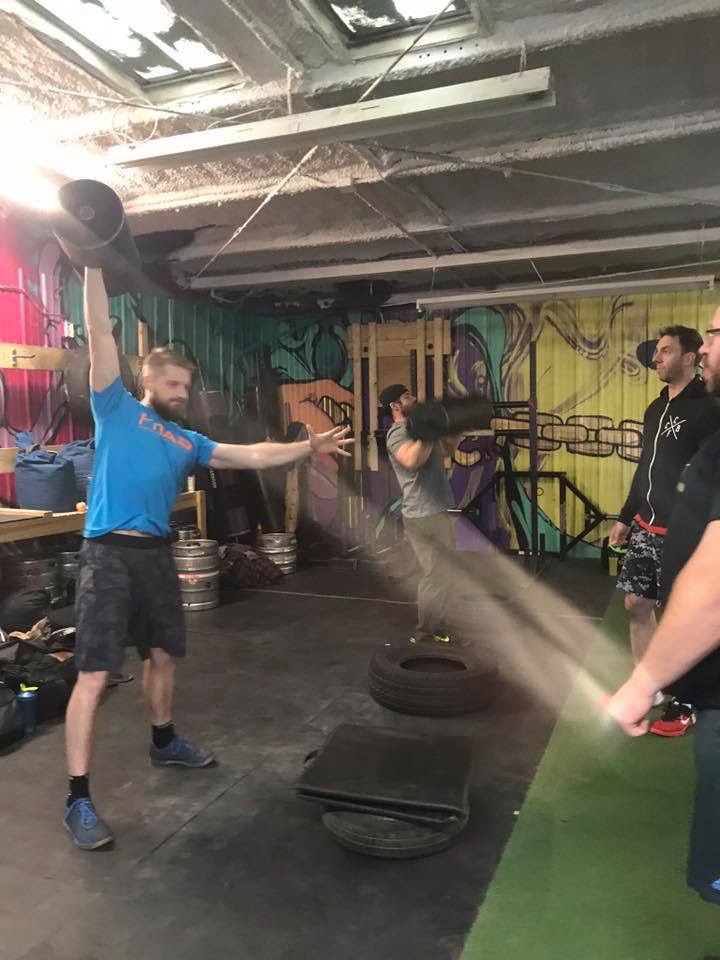 I love being part of an amazing community and helping members move one step closer to their goals. Helping individuals improve and progress is very rewarding!

I have been a member at Barracks Fitness for since 2013. The coaching I have received, the competitions I have done and the experience I have gained in those early years drove me to become a coach myself. It's fun to be able to give back to the community that I have been a part of all these years. 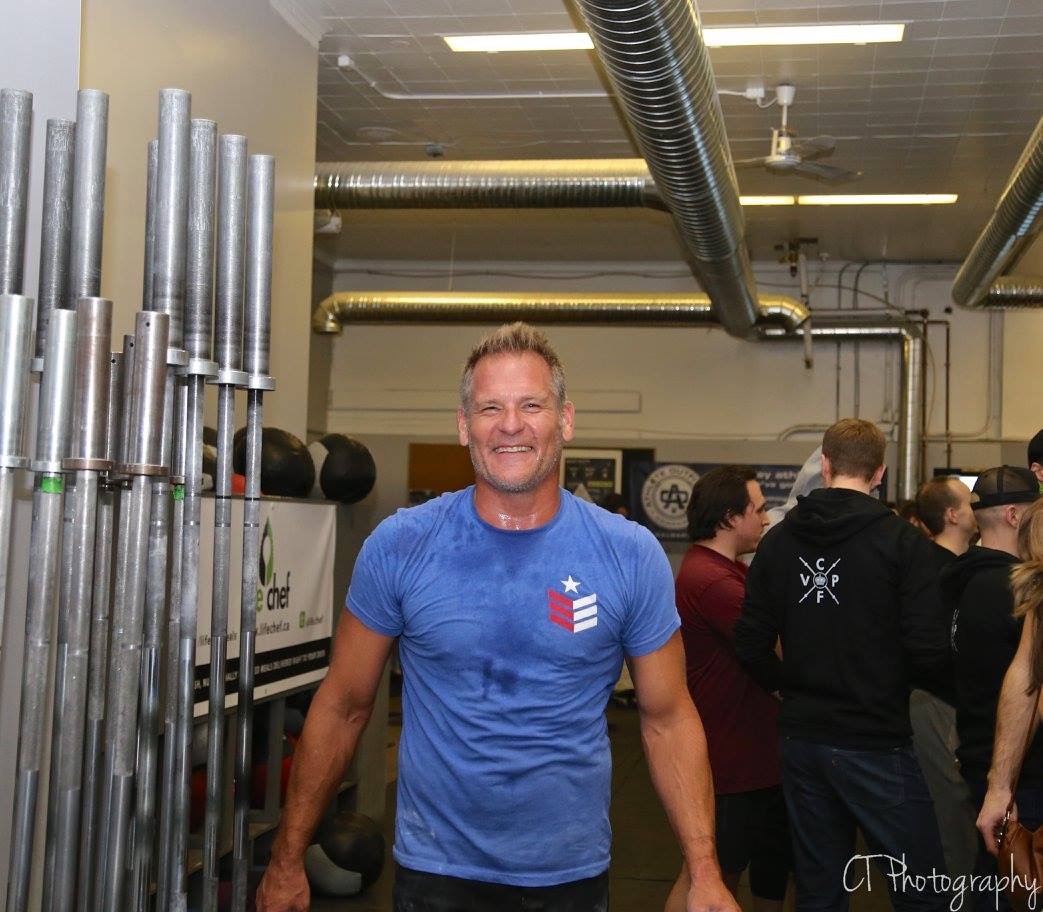 Being a part of an athletes successes. Be it their first pull up or the seasoned athlete crushing their Fran time. I get as excited when I see athletes obtain their fitness goals. It’s such a positive vibe.

I have been an athlete since 2013 and a coach for since 2014. Barracks Fitness & competing in the sport of Crossfit has been a big part of my many successes. Boasting a 2nd place podium finish, support through recovering from injury and encouragement to be the best coach I can be. With such a positive atmosphere and a welcoming smiles every day I walk into the the box it feels like home and as a 50 plus masters athlete I’m in the best shape of my life. 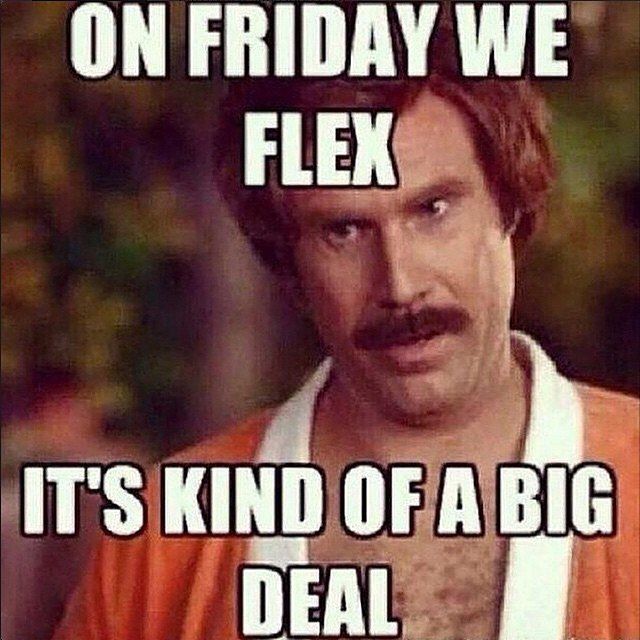 The best part of coaching is absolutely watching the progression of athletes without them even knowing they’re achieving their goals. Then, all of a sudden, they have that Ah-ha moment. Best! Feeling! Ever!!

I have been Crossfitting since 2012 and coaching since 2015. As a competitive collegiate athlete and national champion it was a natural draw to the competitive nature of CrossFit. Having an amazing group of athletes to support and still challenge me made it easy to keep coming back. 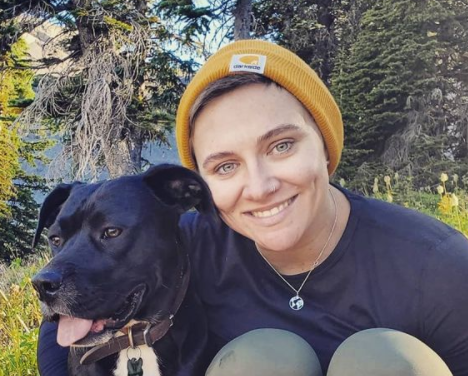 The best part about being a coach at Barracks is, by far, being so involved in the community! Aside from that though I have a passion for correcting movement and helping people reach goals they perhaps thought they never could, so that's pretty neat. Developing a long-term relationship with members, observing and being a part of their progress is both rewarding and motivating. Also, the best best part about being a coach is meeting everyone's dogs.

I started doing CrossFit in a Globo gym with a friend, way back in 2011. It wasn't til 2012 that I joined my first gym back in Australia, then very quickly became a coach, a manager and a part owner of a "box".

My passion for gymnastics started to grow quite quickly and I did my CrossFit gymnastics certification, as well as a handful of others that helped build my coaching ability and confidence. Over the years I participated in many regional competitions (definitely not "the" regionals, gosh) and every Open was the best time of year!

Moving countries in 2017 was probably one of the scariest things I have ever done, but what encouraged me to do so was knowing that I had a CrossFit gym to join. I had one Skype call with Eric before leaving Australia and knew instantly that I would fit in and make friends here!

Aside from having to relearn how to say "barbell" (I think I'm getting there) joining Barracks Fitness has helped me grow so much as a coach, with so many other capable coaches to learn from! Shortly after arriving I attended a CrossFit level 2 seminar to level-up a bit, and then with the help of Eric & Christi have done so many fun seminars like Stronghuman, rowing and more gymnastics!

Best part about being a coach:

I personally love CrossFit. To have the opportunity to share my love for the sport, experiences, knowledge and empower the young and young at heart to meet their personal goals.

It is very exciting and rewarding to see people advance in the sport of fitness! 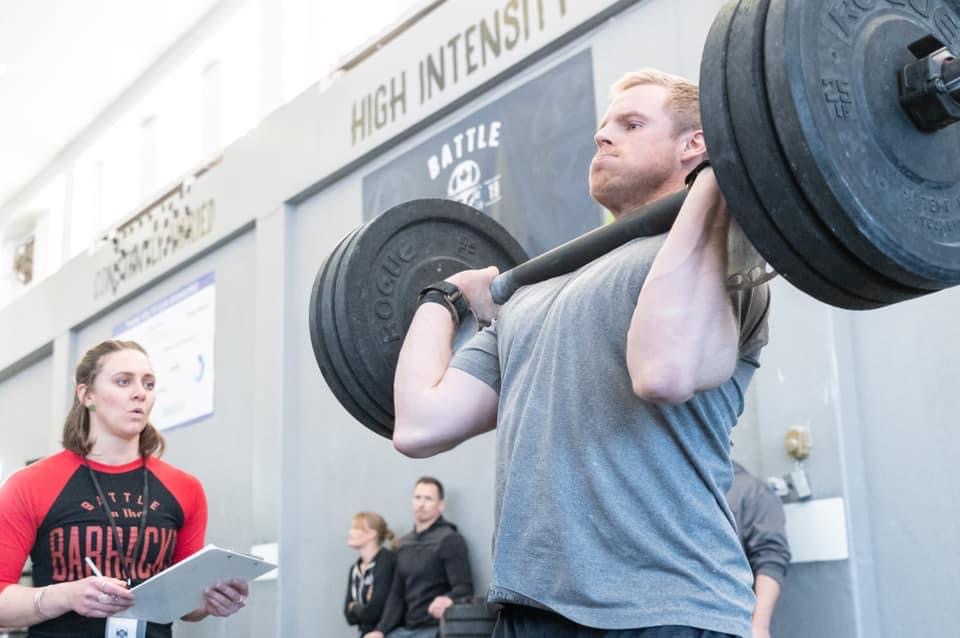 Best part about being a coach?

I get to motivate individuals to be better versions of themselves every day. I strive to encourage hard work and consistency through exercise and lifestyle in order to improve physical and mental health. Building relationships with members and being a part of this community is something that I truly enjoy and take pride in.

My background includes playing a variety of sports growing up until I began to focus on hockey in adolescence. I was fortunate enough to play in the WHL and then again at MRU where I took a degree in Sport and Recreation Management. Once I finished playing hockey, I began coaching for the Association I played for growing up. This was where my passion for coaching and helping others began. I was able to work in the hockey industry while completing an internship at the WHL office, as well as organize and facilitate junior and elite hockey schools and other programs.

I began CrossFit in 2017 after deciding I needed to make some lifestyle changes. I was instantly hooked! What drew me was the ability to progress with not only my own fitness level but learning new skills. Another aspect I enjoyed was the community that made fitness fun. My interest continued to grow, and I was able to start coaching at Barracks Fitness in the summer of 2020. I have competed in a few competitions since starting CrossFit and have learned that the focus needs to be on continued steady process in order to reach your goal. 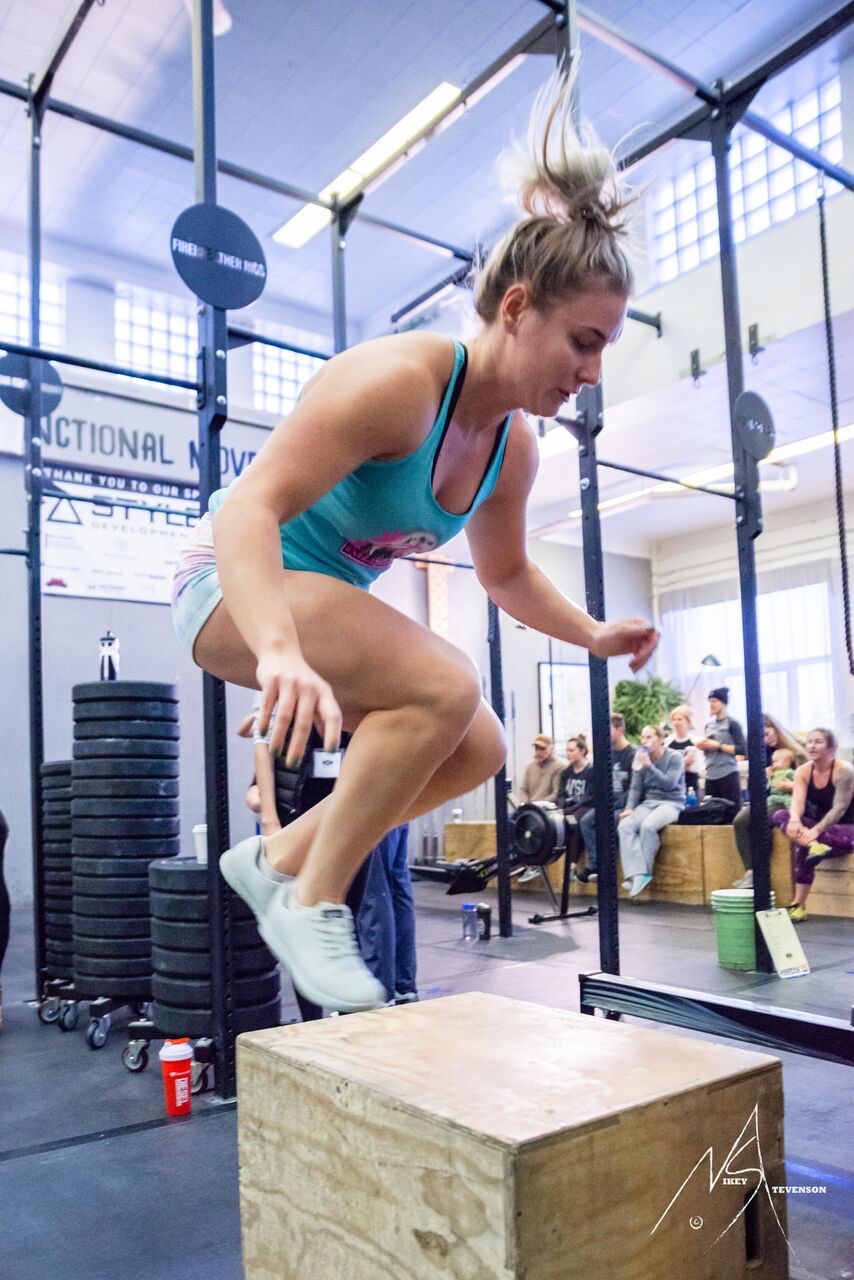 Helping people reach their goals and watching people turn into the best versions of themselves! CrossFit has had an incredibly positive impact on my mental health and lifestyle, and I enjoy being part of that process for others. As I mainly coach kids and teens, I hope to inspire them to reach their fitness goals and take part in their healthy development. I believe CrossFit can empower others and improve confidence!

I also can't forget that the community at Barracks is one-of-a-kind. I am so honoured to be a part of this community and being a coach allows me to connect to the members even more!

Growing up, I played a variety of sports— volleyball, basketball, soccer, swimming, rugby, you name it...I had actually started CrossFit in high school at the age of 16, but was too invested in my high school rugby team to continue. I started CrossFit again in 2015 at CrossFitBC in Vancouver. After 2.5 years, I moved to Calgary and joined Barracks Fitness in 2018. Little did I know, I would be joining an amazing family! I love to compete and have competed in many local competitions (I prefer team over individual!).